I have been interested in audio\video equipment for over 40 years. It all started at a local youth club, where I used to keep the Collaro record player and large Grampian valve amplifier working. I remember it used KT66\88's which would have been around 1963. I started looking at radios that had gone faulty for the neighbours. Kolster Brands was one of the brands I recollect. It had a lamp in series with the mains to drop the voltage for the heaters etc. My grandparents had a McMichael radio with a DC energised speaker magnet.

One of the turntables I owned was the Thorens TD150 with the original arm as supplied by Thorens. It weighed a ton and replaced a succession of Garrard SP25-AP76's which, in truth were rubbish. I replaced the arm with the SME of the time, which cost around £17 - unbelievable how much they fetch now. The Garrard 401 cost about the same as an AP76, around £27. The 401 was in chassis form but the AP76 came with a plinth etc, ready to use. 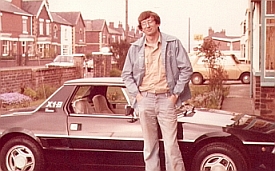 In the early 1970s, I walked into a hifi shop and heard a pair of Bose 901 speakers with an unbelievable sound. Pink Floyd's Dark Side of the Moon was playing and I decided I wanted a pair - until I saw the price. So - yes you guessed it; I decided to build a pair myself! The cabinets were no problem but it was getting drivers of good enough quality, so you may ask why I used EMI 5 inch drivers (I still ask myself that question!). They were poor quality but the only ones available from Wilmslow Audio or 'Swift' as they were called back then. Another pair of speakers followed, a transmission line design using the KEF B200 and a T15 tweeter which wasn't that good at low to mid frequencies. I quickly altered the cabinet design to a Cambridge Audio R40 arrangement-B139\B110\T27, these sounded quite good until the manager where I worked challenged me to an A\B comparison to his Radford’s. I still think mine sounded better. My first 'kit' speakers were a pair of Peerless 20.2 speaker kits, 20 litres with 2 drivers. I remember the bass being exceptional; rubber surround, large magnet and heavy paper cone. Unfortunately the tweeter was a 2 inch paper cone but still sounded quite good for their time.

A yearly pilgrimage to Harrogate in the 70's was essential for the hifi audio fair at the Majestic hotel, and the quest? To see how many plastic bags of leaflets one could collect from the various exhibitors (if only I had kept them all!). The best rooms were the American speakers - JBL\Cerwin Vega - such dynamics, if not accurate sound. I think Cerwin Vega started off Michael Caine saying 'you were only supposed to blow the ---- doors off the exhibition room! I can't remember which exhibitor it was but I was knocked out with the sound of some Japanese records on the '3 Blind Mice' label. They may have been Jazz records but they sounded so good I bought some at the fair.

Motorola brought out a booklet in the 1970's with a range of circuit designs to promote their 'new' range of transistors MJ802\4502 et al. I built a pair of 60 Watt ones which blew the Technics SU-8080 amp away for sound quality (I built it later on in the 70's). The Cambridge P110 I own also uses them incidentally. Now, where can I get MZ2361 diodes and MD8003 dual transistors?

Hitachi made a big hit in the 70's with the introduction of their MOSFETs, with their claim they sounded like valves and could be driven similar to valves. The early circuit sounded horrid due to the driver stage being modulated by the ripple and variation on the supply rails causing intermodulation. They modified the circuit and almost every MOSFET amp has used it since. Ambit in Brentwood were the first to import them and publish circuit details (I've still got a couple of their catalogues somewhere), although they were more into radio\RF design. The Dynaco A25 speakers made a big impression in the 70's, a smallish box with a 10in woofer and a 1.5in dome tweeter with resistive loading port. This sat at the top of the cabinet in the early ones and at the bottom in most of those sold (these have been resurrected in world audio speaker design).

I bought a pair of Altec Lancing model 7's, what amazing, dynamic sounding, speakers, I had those with a Technics SU-8080 amplifier, SL-1300 turntable, ST-8077 tuner and an Hitachi 3 head cassette deck, the worst deck I ever had. The deck was noisy and hummed badly. I took it back after a week and can't remember what I got in its place. Up till then I had had many bits of hifi equipment - Garrard AP76, Empire 999V\EX, Ultimo 10x, Thorens TD 150\SME 3009...

Just remembered I made a list of all the old hifi stuff I had, this is a list of the equipment I can remember having:

So what have we learned from this?

2. You forget things as you get older.

3. It's not the equipment that's important its the enjoyment of the music.

4. Thanks to eBay all this is accessible at a realistic prices.